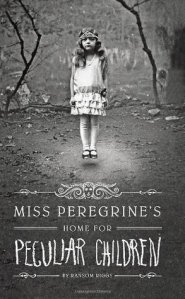 A mysterious island. An abandoned orphanage. A strange collection of very curious photographs.

It all waits to be discovered in Miss. Peregrine’s Home for Peculiar Children, an unforgettable novel that mixes fiction and photography in a thrilling reading experience. As our story opens, a horrific family tragedy sets sixteen-year-old Jacob journeying to a remote island off the coast of Wales, where he discovers the crumbling ruins of Miss. Peregrine’s Home for Peculiar Children. As Jacob explores its abandoned bedrooms and hallways, it becomes clear that the children were more than just peculiar. They may have been dangerous. They may have been quarantined on a deserted island for good reason. And somehow– impossible though it seems– they may still be alive.

Review of the Characters:

Jacob– Jacob was one HUGE complex. The author wrote him as seventeen but he acted much younger than that making the character unbelievable. He was very compelling in the beginning of the novel but then he starts to get whiny and all high and mighty. You all know I love a flawed character because they’re honest and real, but Jacob’s flaws weren’t honest or believable. I also didn’t understand his instant attraction to Emma, and why the romance escalated so quickly. When it comes down to it my main problem with Jacob was the author told us one thing and then Jacob would act the complete opposite. It makes me wonder if the author wanted a younger protagonist in the first place but felt like Jacob had to be an older teen for marketing purposes…

Emma– The problem with Emma is SHE ONLY STOOD OUT TO SATISFY A LOVE INTEREST. All of the peculiar children didn’t exist outside of their oddities so they sort of faded into the background easily forgotten. But not Emma, no, she stands out at least to our protagonist within the first few pages of their meeting and its instant love. Why does every young adult novel feel the need to insert romance? You should ONLY do if it MOVES YOUR STORY FORWARD, if it doesn’t then nix it.

Review of the Story:

The author starts with a bang but then fizzles out until the last 50 pages or so. It’s like the author lost track of the story and only just found the thread after meandering for a hundred pages.

The pictures do add a great effect, and it’s almost worth it to buy the book if only to see the pictures. However, towards the end of the novel the connection between the pictures and the story becomes vague until his reasons are far fetching. It felt like the author himself was attached to certain pictures but he didn’t know how to include them in the story so he forced them in and wrote extremely loose connections that came off obvious and disrupted from the overall flow of the story.

I do have to say that the novel receives MAJOR points for originality, I have never read another book like it. The peculiar children were fascinating even though their personalities were a bit bland and the way the author incorporated the pictures was a unique feature. The novel also plays with the idea of time travel in way that I haven’t seen done before and even though it raises a few questions that goes unanswered, I enjoyed that aspect of the story.

As for the wights and hollows, they were truly scary and the overall ending was well executed even though it took a LONG time to get there.

Review of the Writing:

Ransom Riggs made a brilliant decision in matching his creepy photos with a simplistic writing style for an overall haunting effect. If he elongated the style and made the writing more elegant for lack of better terms, it would have over complicated the effect of the photos and made for a tedious read.

The problem with his writing though is he came up with the brilliant idea but couldn’t execute the details. For example the characters, Jacob is seventeen but once he becomes involved with the peculiar children he interacts with them normally which is surprising and UNBELIEVABLE because Jacob is much older than the children. I think their relationship needed to be better explained.

And as for the peculiar children themselves, yes they were fascinating but I was left with a dozen questions that received no kind of resolution. The story promises a haunting tale but the author relies on the pictures too much to convey this purpose and without strong connections to the story line they fail him ultimately in the end.

I think that if the author had written a collection of short stories that tied to the pictures, than it would have made a better novel. Maybe each peculiar child could receive its own little story since most of the pictures related to them somehow? Overall, the author had a fantastic premise and unique concept, but in the end he comes up short. With that said, I will be reading the next in the series (those pictures really are AMAZING).

P.S.– My next read is In the Line of Ire by Edwin Dasso